I’m going out on a limb here, but I’m calling it our Best Musical Moments Ever!

We fundraised a total of $1975 on the day for The Examiner’s Empty Stocking Appeal which is another fantastic result. We had a good number of people coming to watch us – some first-timers and some regulars – and their feedback has all been extremely positive.

We showcased outstanding local talent in some of our youngsters in Julia Parker, Frances O’Rourke and Hanlon Innocent, who I’m sure we will hear of again. We will certainly endeavour to follow their future careers.

GLYS captured all our attention with their performance of “Cups” which was just a fantastic spectacle to watch. Well done!

Many thanks to the many members of Right On Cue who came down from Devonport, and who once again delivered outstanding performances of their repertoire. Tunggare, although simple in lyrics, is not an easy song to perform and getting all those claps together was an achievement in itself!

Vox Harmony had 43 of their 51 members in attendance which was – I believe – also a record. Vox Harmony worked hard on blending our sound during the year and this culminated in many hauntingly beautiful renditions of Gabriel’s Oboe and The Seal Lullaby which were complemented by captivating imagery in the background.

Many thanks also to our oboist Matthew Dudfield, cellist Natalie Hillier and violinist Alexandra Harris. Our songs really came to life through their accompaniment.

Denise took a few risks with our songs/sound this year and they seem to have paid off in more ways than one. It was a marvellous afternoon, topped only by Denise’s announcement that Vox Harmony Is Going On Tour! Yes, you heard it right – 2016 will be our year for travel and consequently we will require all those signing up for 2015 to also sign up for 2016 as there will be no new intake in 2016.

This is an exciting prospect and one which I personally very much look forward to. Keep an eye on the web site for further announcements. 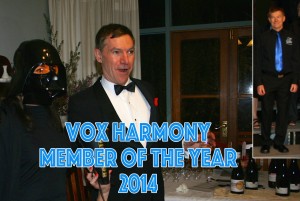 And finally, congratulations to Member Of The Year, Colin Denney – who not only took up the very busy and challenging position of Treasurer, but also showed his musical and technological prowess by converting our musical score, adding musical instruments and his own voice using several software programmes and output to mp3 for our voice part learning.

A time-consuming process which is much appreciated by all of us as it has made learning difficult parts so much easier. Thank you, Colin!